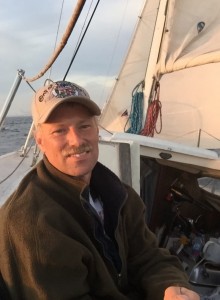 So, I’ve lost my mast three times now unfortunately (or fortunately depending on how much value you place on learning from your mistakes! LOL). This is the story of my second de masting in a small storm out of Marina Del Rey, CA:

It was 2012, I’m guessing in March when I left the marina with strong winds coming out of the west. It didn’t take too long to get out to sea where 6-10 foot waves were waiting for me. It looked like a mess out there – but I’ve been in much worse. I had the little jib up and it sailed well over the big ten footers. I had a little trouble on the way back as the boat kept wanting to head up into the strong gusting winds and I realized I had not let the mainsail out enough (I had it out on a broad reach but even that was not enough to keep the boat from wanting to head up!) After an hour of sailing out there in dangerous waves that crashed over the bow and white water that threatened to broach the boat, I came back into the breakwater and realized I had only sailed two hours! It had been a dozen heavy weather lessons all packed into a short time span. 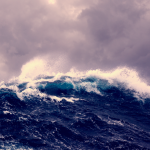 I need four hours to qualify for a “full day at sea” (for my captains license), so I sailed to the other end of the marina and back and STILL had an hour left. The sun had set when I got back at the entrance to the sea and I decided to head out into the waves at night for half an hour more. I wasn’t really afraid as I have been out in similar weather at night many times. The sea had calmed a bit by now and had lost the big white caps from earlier. The wind had also had calmed  – perhaps from twenty knots gusts to ten – and was right on the edge but not bad enough to warrant a sail change. I had raised the Genoa again – just 20 mins earlier and was confident my shrouds were strong (as I check them often) and that the big jib could handle the load. However, because I had been out an hour in the waves, I should have paid some attention to the spreaders. In hindsight, I later had a suspicion that the
port spreader cross tree was slipping a little with all the tossing about that day. For no sooner had I got an eighth of a mile out and suddenly with a gunshot like crack, the mast was suddenly swept away right off the deck! 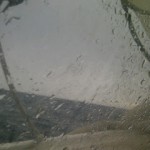 One moment the mast was on and the next it was gone. One of my worst nightmares – being caught in big seas and losing my mast – had come true. Thankfully the seas weren’t twenty feet and breaking! Anyway, now the mast lay on the water with all sails. The motion of the boat slowed down instantly and now I was just floating around without any ability to steer the boat. By slowing down almost to a standstill, this made the boat ride the waves almost like you can imagine a rubber ducky would. But in losirng speed, the rudder would not work. I knew I needed to get a sea anchor going so I could keep the boat heading up into the waves. So I opened the hatch to go check what I could do. I was half terrified of even opening my cabin to look, as opening the hatches made me vulnerable to taking on water if a big wave hit me broadsides. But I had to try! So after stepping into the cabin and looking around, I couldn’t see anything that would work and realized I was just going to have to live with the craziness. So giving up on that idea, I decided to do the next most important thing which was to call in an S.O.S to the Harbor Patrol. While waiting for them to come, I then pulled on the rigging – trying to pull the mast out of the water. However, pulling on the shrouds was making my hands blead, so I decided to try and pull on the softer rope halyards instead. That seemed to work and I soon had the top of the mast out of the water and winched in to the cleat. But it was SO heavy! I could barely do that. At that point, I remember seeing the Harbor Patrol boat coming out of the breakwater. Suddenly in the dark, I saw a big ten foot wave coming. The boat began to ride up its big front and as it came to the top, the wave jolted the boat – hitting it and pushing it forward with all of its might. A surge of fear welled up inside of me. I didn’t like the boat so out of control. Nevertheless, this must have happened three times before the Harbor Patrol arrived. Thankfully this was the worst of it.

When the patrol came – you can imagine how happy I was! Soon the rescue men had heaved over the waves a line. Catching it for dear life, I then attached it to the bow and we were off – dragging the twenty five foot mast behind me with the sails still in the water. As I was towed along, I was able to get the other half of the broken mast out of the ocean and attach it to the side of the bow. But getting the whole mast up and onto the deck was more than I could do or figure out at that time.

It was at this time that it suddenly dawned on me that I could have attached my 100 foot rope to my big bucket and that this would have made a sufficient sea anchor! And afterwards (while going to sleep that night in the safety of my slip), it also dawned on me that if I had attached a strong rope to where the spreaders connect to the mast, I may have been able to pull the broken mast up and over the stern rail. Oh well. Something learned for another time! But more importantly, I hope I will have learned enough to keep me out of this kind of trouble – ever again! But knowing me, only time will tell.”

And just to fill you in…it wasn’t! I had another incident in 2019 around the same time of year and lost my mast again. More about that another time! Here are some pics of the make shift mast and sails I made as I experimented with sailing a boat without the usual advantages of the proper size mast and sails in the proper place: 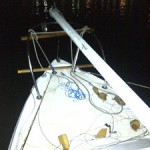 PS: If you would like to join our team and work together with me one on one,
you can find out more about our team here.

If you would like to have a Free Advertising & Marketing System, go here.

Great Opportunities: Big Savings on Travel & Hotel, Cut Your Cable Bill in Half,
and Much Much More Go here

Amazing story how a young teenage

girl sailed around the world alone!