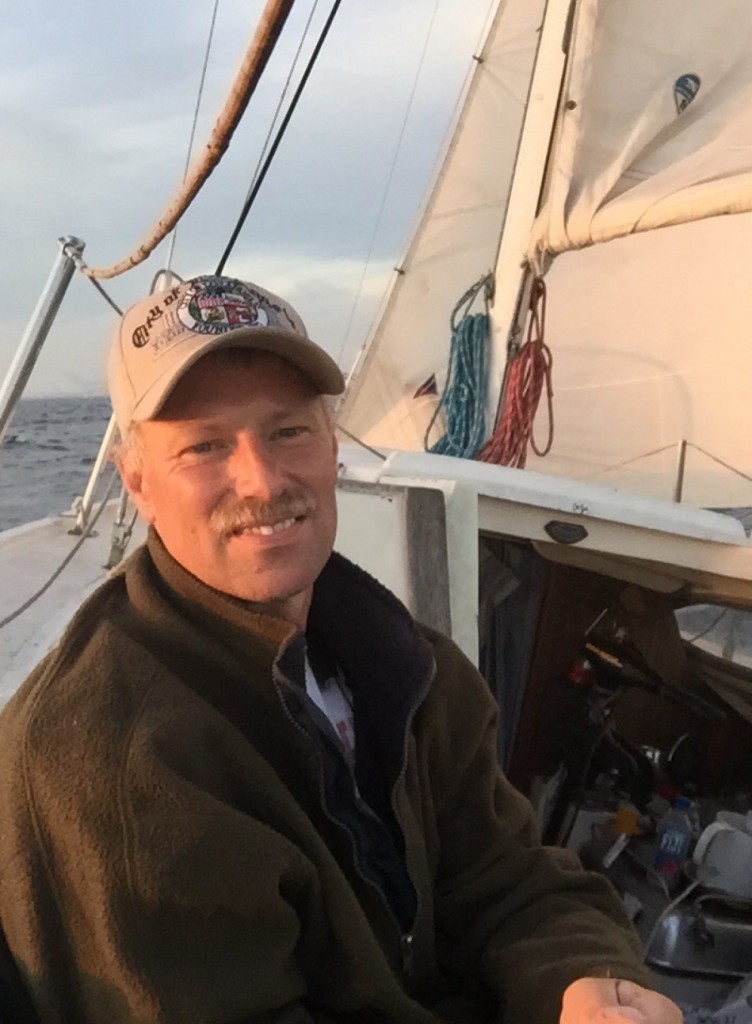 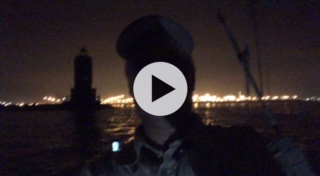 .Tonight, I sail past the lighthouse on my way out to sea. The light in its huge window suddenly glows green and I hear the deep fog horn blast across the water.

Later, out on the ocean, the lights of San Pedro (many miles away) sparkle like glitter. The dark sea passes as I sail along. Up in the sky, a few stars manage to find their way out of the clouds and shine down upon me. It reminds me of many nights sailing along this same shore. Here is one story I vividly remember. 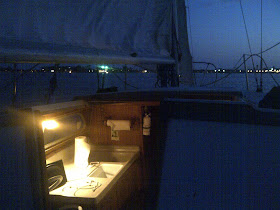 .The date was Monday, March 30, 2015. A while before I had lost my engine in a bad storm and was sailing (quite literally) up from San Diego to Los Angeles:

“As the sun was going down twelve dolphins jumped out of the water and at the same time surfed a big wave. Water flew everywhere!

Later the stars were beautiful out at sea and the lights on the mountains were intriguing. The rushing of water past the boat was restful.

San Pedro was trying to win the award for most lights blazing the night sky!”

After the wind came out late that morning, I sailed on from Newport Beach area up towards Long Beach and San Pedro. I was already about five miles out at sea and had been out here all night waiting for the wind to begin.

After sailing for a while I knew my next obstacle would be passing through the Long Beach shipping lanes that pass near the oil rigs out at sea. The first shipping lane was at least a few miles wide so I knew I was going to need a steady amount of wind to pass across it.

Since my average speed was about 3 – 4 knots, it would take me about an hour to cross it and if the wind got flaky on me – I would get stuck there. One thing you don’t want is to get stuck in the Shipping Lane with a huge ship bearing down on you!

I didn’t want to risk that and so I needed to be pretty sure the wind would hold. After about an hour of sailing at a constant speed, I figured that would be as much assurance from the wind that I would get – so I went for it!
At this point I texted my wife and let her know what I was doing:

Albie: “Ok. Passing through shipping lane in 15 min. I love u very much. Whatcha doin today?”

Wife: “Helping Atiana, recycling, getting flyers out 4 Prince (our dog).”

A: Oh good! Tell Atiana hi. And our kids too!

That was it for the text messages – now for the Shipping Lane. All went well for most of the way across when all of a sudden I saw a big ship coming!

The distance of the ship was at least five miles off but those ships come fast! I figured that the ship was moving at least 10MPH and possibly faster so that meant it would pass my way in probably 15 mins. I knew I would be across before then so I felt ok. But I undid the jib line from the winch and held it in my hand and pulled it in and let it out manually to help the boat go it’s maximum speed. 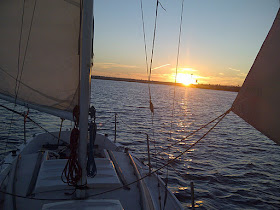 All went well and I passed the shipping lane without incident. I now could see the big ship passing by where I was. I was happy that I had measured its speed correctly.

Soon I sailed right by an oil rig! It was amazing. I’ve seen these oil rigs from the beach many times but always wondered how it would be to see them up close. Now I was getting that chance. And I can tell you it was really weird!

Those oil rigs stand really high and tall out of the water like you can imagine. It’s just the craziest thing when you’ve been sailing out at sea and seen nothing but water for two  days to all of a sudden pass by one of these! It’s really not anything I can explain…you just kind of have to do it to understand!

Anyway, after passing to the left and right (port and starboard) of a few of these oil rigs, I finally came to where I could see Long Beach off to my right. It wasn’t long before I was getting near San Pedro too.

In the mean time I thought I had sailed far enough out to sea to clear San Pedro and Point Vicente but the wind was driving right in my face and I was on a close haul tacking harder towards land than I had hoped. So much harder that soon I realized that I wouldn’t even clear San Pedro – not to mention Point Vicente!

So I tacked again out to sea towards Catalina island. I was not really getting much farther ahead – maybe just a little so I didn’t like this tack. It just would mean getting home was going to take that much longer. Here’s a text to my wife around that time:

Albie: Hey! I’m cruising @ 6knots along San Pedro. Trying 2 pass Pt Vicente. It juts out into ocean & the wind blows in ur face making it hard to pass.

A: Plus the wind is blowing 20 knots & waves r short n steep (but only 2 feet). I will b SO glad when make past Visente (Gods help). Miss u!

W: Mom is wondering where u r @ this point and how far u have gottin.

A: Can see San Vicente pt. Am half way across Long Beach/ 1/2 way out 2 Catalina. Super wind. If continues u can come get me this eve!

And a little later…:

A: I love and miss u So much. Tonight was a beautiful sunset and San Pedro Hill was pleasant 2 sail by. Was very lonely 4 u all.

A: Wish u were here w/ me seeing all these beautiful sights. The stars r beautiful and the lights on the mountains. The rushing of waters past the boat is restful.

A: Having 2 heave-to by Vicinte Pt. tonight. Wind died just as getting close 2 rounding it. 🙁 But, Lord Willing, will b able 2 go 2 MDR tomorrow. I Love u! Xxooo

W: U must b tired.  Hey u r almost back.  R u excited? JUST AROUND THE RIVER BEND…  Kisses”

We ended the texting around there.

Later I tacked again towards Point Vicente, hoping that I would clear it but it was at this time (11:00pm) that the wind died again leaving me two miles from shore. In the morning the drift of the tide and waves had brought me in about a mile or so from shore. I was thankful I was far enough out during the night so I hadn’t got too close to shore by morning!

I hove-to all night (putting the sails in opposite directions so that the wind would just move the boat back and forth or sometimes just in circles). It’s kind of like parking out at sea. Sometimes people ask me why I don’t just drop the anchor but I explain that the water is so deep out there that I would need close to a thousand feet of line to even anchor at all (the depth being 300 ft or more).

It was as restful as a night as one can expect having to wake up and check for boats and ships every 10 or 15 mins all night. I had gotten used to it by now though. I don’t have any bad memories.

In fact I can only remember the fascinating things like watching the oscillating light from Point Vicente shine bright and then disappear for seven or eight seconds as it shined bright in its circular wide path.

Then I remember waking up and seeing a fishing boat coming my way.  He passed and went by a ship on the horizon in the shipping lanes – some going north up toward San Francisco and some heading south to Long Beach or San Diego.

I felt a little vulnerable out at sea without much power – except an oar in a real emergency. But at the same time I felt fairly safe too – knowing I was far enough away from the shipping lanes and not really in the way of fishing boats either. So it was a strange feeling of happiness and concern all mixed together.

I really enjoyed the rhythm of it all – the constant movement of the waves against the boat, the silence and solitude. The only sounds were the sounds of the sea and the main sail moving from side to side (windless) with the motion of the waves. The darkness with the slight light of the stars shining from above was also amazing.

I was nearly back. Redondo Beach was ‘just around the corner’ – so to speak and then after that was Marina Del Rey (about 10 miles off). As soon as the wind came out (in the morning or later tonight) I would be off.”

Want to read the original story or the series? You can find it and many more stories by clicking here and reading from my original sailing blog:

Sailing Up From San Diego IX: From Newport Beach To Point Viscente 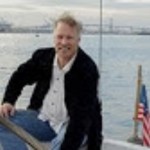 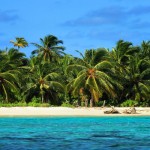